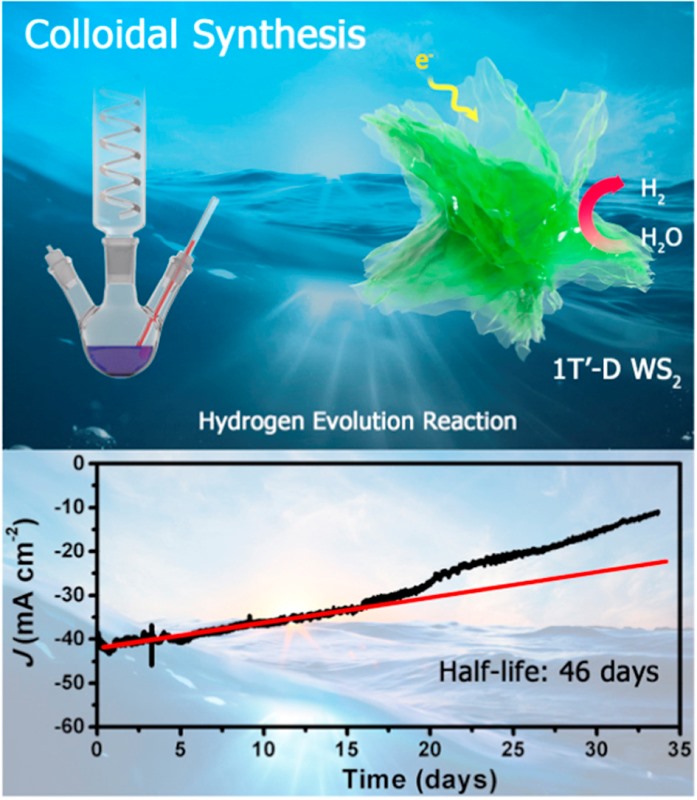 Transition metal dichalcogenide (TMD) nanomaterials have attracted tremendous attention due to their great potential for hydrogen evolution reaction (HER), especially with their metallic 1T/1T′ phase, which possesses much higher HER activity than the 2H phase. But the metallic phase can transform to 2H phase accompanied by an undesirable degradation in HER activity. Currently, how to prepare the stable metallic phase TMD nanomaterials enabling an endurable HER is one of the main challenges for practical application. Herein, we establish an effective colloidal chemistry strategy for the controllable synthesis of metallic 1T′ phase dominated WS2 (1T′-D WS2) nanostructures. Such 1T′-D WS2 exhibits higher performance and more stable HER activity than 2H phase WS2 in the H2SO4 electrolyte. The endurance half-life of 1T′-D WS2 from stability testing under constant overpotential of 0.3 V vs. RHE and an initial current density of 41 mA/cm2 is about 46 days, despite vigorous erosion due to continuous H2 bubbling which exerts large capillary stresses on the atomic sheets. The facile preparation of highly stable 1T′-phase dominated TMD nanomaterials advances them as competitive sustainable HER electrocatalysts.